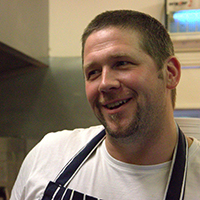 ‘I grew up in a small village on the outskirts of Midleton called Ballinacurra. My earliest memories of food would be when I visited my Grandmother. She was always making bread and tarts in her old-fashioned stove.

My father used to work in Johnny Barry’s Bakery in Midleton, and would always arrive home with fresh bread. I began my chef training in CIT where I got a job in the ‘Bayview Hotel’ in Ballycotton, under Kieran Skully.

I then moved further afield to The Kingsley Hotel Cork under Paddy Kennedy and after that I went to Jacobs on the Mall where I worked under Mercy Fenton. I moved back to Midleton and worked in The Cross of Cloyne Restaurant. Then a job opportunity of Head Chef arose in Raymond’s Restaurant where I worked for the past thirteen years. Now myself and Pat have taken a bigger step and took over as co-owners of Ferrit & Lee in March 2017 and we are excited for the new challenge ahead of us.” 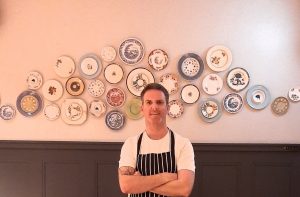 ” I grew up in Ballinascartha just outside Midleton. My first experience of cooking came from school work experience in the ‘Clean Slate’ under Colm Falvey. It was here I discovered the excitement and buzz of a professional kitchen and I continued to work weekends and holidays after my work experience finished.

Rather than follow in my families’ footsteps of becoming an accountant, I decided to pursue a career in the catering industry based on my growing love of food and the thrill of working in a challenging environment! After completing my course in culinary arts in CIT and working in the ‘Bayview Hotel’ under Kieran Scully, I moved to Australia where I worked in a number of restaurants.

After a year I returned home with the hope of eventually owning my own business. So began my 12 years of working in Raymond’s Restaurant with Stephen. When the opportunity arose to take over Raymond’s with Stephen, we were delighted to take on a new challenge. I’m looking forward to the years ahead with the new role of business owner.”

This website uses cookies to improve your experience while you navigate through the website. Out of these, the cookies that are categorized as necessary are stored on your browser as they are essential for the working of basic functionalities of the website. We also use third-party cookies that help us analyze and understand how you use this website. These cookies will be stored in your browser only with your consent. You also have the option to opt-out of these cookies. But opting out of some of these cookies may affect your browsing experience.
Necessary Always Enabled
Necessary cookies are absolutely essential for the website to function properly. This category only includes cookies that ensures basic functionalities and security features of the website. These cookies do not store any personal information.
Non-necessary
Any cookies that may not be particularly necessary for the website to function and is used specifically to collect user personal data via analytics, ads, other embedded contents are termed as non-necessary cookies. It is mandatory to procure user consent prior to running these cookies on your website.
SAVE & ACCEPT